Home What are Indian clubs?

What are Indian clubs? How is training with Indian clubs different from other strength and fitness methods? Are Indian clubs the same as clubbells? How heavy are they? Let’s shed some light on these common questions.

Indian clubs are a very ancient type of exercise equipment that are swung in circular and spiraling patterns to develop strength, agility and mobility.

Initially a melée weapon, Indian clubs soon were used to improve the physical qualities of warriors. They eventually became part of the strength and fitness routine of wrestlers, before they were introduced in European physical culture circles in the 1800’s. Traditionally made of wood, these clubs or odd shaped blunt weapon replicas can vary in design, size and weight. They can be swung alone or in pairs.

Hindu, Tamil and Persian warriors swung clubs, lifted stones, and trained with other weapon replicas to improve their strength, agility and other functional skills for survival on the battlefield.

How do Indian clubs work?

The first thing you must understand is that our bodies grow stronger as a response to the demands of resistance. Weight is resistance, but resistance can take many forms!

If we look at a dumbbell, the center of mass is in the hand, and you typically would lift it in a straight line, to shorten the distance between start to finish. Not so with Indian clubs… 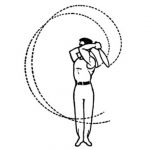 All exercise clubs have a displaced center of mass, which means that the center of mass is away from the hand that holds them. This creates an extended lever arm which challenges your balance and strength, from your toes, your midsection and all the way to your grip. Even a set of light clubs can rapidly become challenging!

The circular swings stretch the connective tissues and put gentle traction on the joints, resulting in increased mobility, flexibility, and overall well being.

Finally, the goal is not merely to swing the clubs for a few repetitions, but rather to perform high repetitions without interruption.

More repetitions means more blood flow, which means faster delivery of oxygen and nutrients to enhance healing and recovery of muscles, tendons and ligaments from your shoulders, elbows to wrists.

“I can’t say enough about the amount of shoulder and back health and even hip health I’ve regained in the last 2 weeks. It’s like 10 years of progress. When I lift my arms now my core starts to automatically engage! This is after 2 weeks! It’s almost a miracle.”
–  Click here to read Chris Webb’s  full testimonial–

We receive too many messages about the fantastic healing of Indian clubs to post them all!
Heroic Sport CEO Ron Bader himself made a fantastic recovery with Indian clubs after a horrific accident that left him with a broken spine and skull. All we can say, is that we became believers through our practice and teaching other people.

The mental benefits of club swinging

For the experienced practitioner, swinging Indian clubs becomes a form of meditation in motion, like Yoga or Taiji with weights. You can reboot your mind and body in under 2 minutes.

What do Indian clubs weigh? 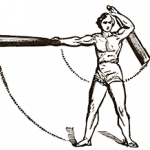 In the West, we call them Indian clubs, but they are called mudgars (and a few other names) in India, Meels in Iran and Karlakattai in Southern India. They can weigh anything from 4kg to over 20kg.

The Brits came across mudgars while stationed and running the East India company. They simply named them ”Indian clubs” and took the concept back to Europe in the 1800’s.

Those new British style Indian clubs were smaller, weighing 1-2kg. They were used to counter the effects of a sedentary lifestyle more than to build strong physiques. Being smaller and lighter, a whole new repertoire of exercises became suddenly available. 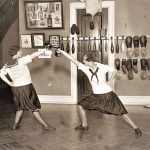 In essence, there are 2 branches of club swinging: light/ open style, or heavy/ closed style.

Boxers and fencing athletes immediately saw the relevance of training with light Indian clubs to become better at their sport.
A strong interest in both a “sound mind in a sound body”and discipline during the Victorian era helped make clubs very popular with large institutions, like schools, the Military, and civic organizations like the German Turners and Czech Sokol movements.

Both the Turners and Sokols would hold festivals in open air stadiums in which thousands of people swung in sync as a group to music.

Are clubbells the same as Indian clubs?

Clubbells or steel clubs are inspired by Indian clubs and came on the market in the early 2000’s.

A lot of the weight is in the handle, with the barrel (main body) being very slim. As a result, they do not swing like traditional wooden clubs. While they can be fine for some basic heavy club exercises, we do not recommend them at all for British style club swinging exercises.

What about Heroic Sport adjustable clubs?

Would you believe us if we told you that our Pahlavandle (original or heavy clubs) swing like traditional wooden clubs? Probably not… So instead, watch this video, observe the movements and decide by yourself. Or read the reviews customers left us!