Do you know the zercher squat? If you’re into strength, health and longevity, at one point or another, you might want to consider adding loaded squats to your club swinging routine.

Research shows that using the legs, particularly in weight-bearing exercise, sends signals to the brain that are vital for the production of healthy neural cells.

According to studies from King’s College of London, there’s a specific link between strong legs and a strong mind. The conclusions show that subjects with the greater leg power  experienced less cognitive decline over a 10-year period, and overall aged better cognitively.

Historians have found references to feats of strength and weight lifting competitions dating as far back as the 3600 BC. Strength was not merely an object of vanity but instead something of considerable societal importance.

Military recruits in ancient China were required to pass specific strength tests before they were allowed to join.

Tamil, Hindu and Persian club swingers also lifted weights in one form or another, and worked on all around strength and fitness, as their physical training system was martial in nature. Wrestling and fighting was just part of their daily life.

The legendary wrestler known as the great Gama, performed thousands of squats daily with stone neck rings (Gar-nal), and pushed all his might against trees, in an effort to uproot them.

Even in Europe, back in the 1800’s, Indian clubs were a complimentary discipline to gymnastics, weight training, boxing and fencing.

All leg exercises are great, and in our videos we show you many ways to integrate the lower body with Indian clubs. But usually the loading parameters fall more into the endurance spectrum of strength, rather than pure strength.

The good thing is that any type of squatting is better than no squatting, and will improve your hip mobility, which is so important for ageing well.

When it comes to strength, you need a load  heavy enough to provide the right stimulus. Bodyweight squats are a great way to start and practice form, but when you can easily do 15-25 reps non stop, you need to start adding weight.

I do not advocate you to start becoming a squat specialist and think you need to squat double bodyweight  or as heavy as possible to get the benefits of loaded squats.

If you’re over 40, and are not looking at setting any records, focus on form over load. One “heavy” squat session a week is enough, but keep squatting and lunging the other days, using light weight. Basically do it often with a light  weight, not so often with a heavy weight.

The next step after bodyweight squats are Goblet squats. For these, you will need either a dumbbell or kettlebell, and watch our tutorial.

As you get stronger, you might need something heavier, like a barbell or a sandbag. We show you how cheap and easy it is to make your own sandbags further down!

Doing heavy squats with a barbell typically requires you to either:

This is where the Zercher squat comes in

The Zercher squat is an exercise named after St. Louis strongman Ed Zercher. Back in these days (1930-40), not many gyms had a squat rack. You could call it the kettlebell goblet squat’s grandfather or strong uncle…

The video below shows you how to safely perform it.

I recommend wearing some elbow sleeves, and stance of course, is a matter of personal preference. I demonstrate the zercher squat with a wide stance. Some people might favor a narrow stance with elbow outside the knees.

For the fans of physical culture history, the Zercher lift had become a sanctioned USAWA lift in the 1960s. At 156 lbs bodyweight, some of Ed Zercher lifts included:

Picking up something heavy from the floor and standing up with it is fantastic to strengthen your whole body.
Squatting with the load in front on the body rather than on the shoulders has some hidden benefits too. Many people struggle with balance (often falling back) and squat depth.

In the Goblet and Zercher squats, the weight being in front of the body helps you maintain balance over your stance. At the same time, they also challenge the lower back to remain upright and prevent the torso from falling forward.

From experience, this allows people to squat deeper with better form, especially if you follow our tips on increasing ankle mobility.

The barbell Zercher squat is one of the exercise from “Kettlebell Strong” our 12 week kettlebell and barbell program for the intermediate lifter.

When lifting heavy weight, we have to create a virtual corset that braces and protects our spine.

This is radically different to the type of breathing we use when swinging Indian clubs.

In the video, I explain as clearly and simply as possible the concepts of rich anchoring and virtual corset.

The rib anchor helps prevent the lower back from arching, and putting stress on the spine. The virtual corset protects the back from compression — weight-bearing, impact, and vibration, as well as any distortion in shape like arching, rounding, or twisting.

Make your own sandbag and learn how to lift it

Not everyone has access to a barbell. Sandbags are great, and the beauty is you do not need anything fancy to be effective!
Oh, and they cost next to nothing to make…

This Christmas, join us for 4 exciting Indian clubs workouts every Advent Sunday! It’s our little thank you for your continued support and feedback. The videos will be taken down in 2020, but you’ll get the chance to purchase them at a ridiculous low price!

Thierry is combining Indian clubs with kettlebells, bodyweight and even sandbag exercises.
Just follow along and get a great  full body workout in under 30 minutes.

Remember to use the appropriate weight for each exercise, and be ready to substitute exercises if you’re unsure about how to perform them!

Have the best and merriest Christmas, and scroll below for a 50% discount promo code!

SUBSCRIBE to our channel to get reminders about the coming videos!

Our tutorials are very detailed, filmed from different angles, slow-mo where necessary, and we break down complex moves into smaller chunks. They are different from what we share on social medias, and also organized in a progressive way, making it easy to assimilate the complexity of Indian clubs.

Take advantage of our special offer this December. From GET STARTED VIDEOS (which are sorted in themes) or COMBINATION SWINGS AND CIRCUITS, there is something for all levels!

The offer does not apply to items on sale. 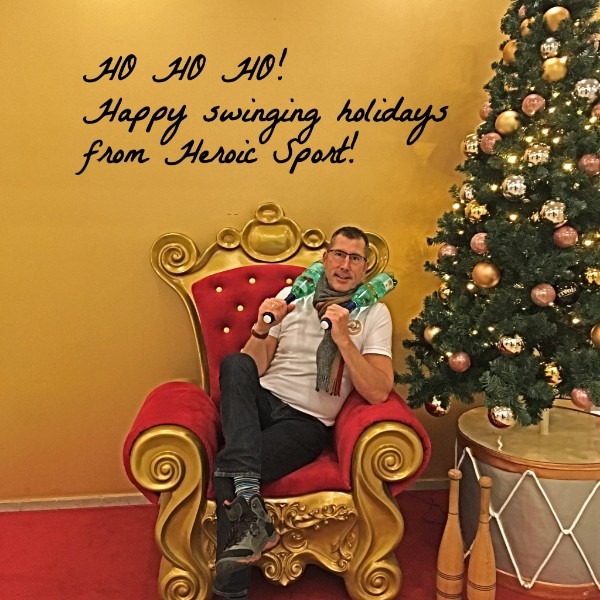 Ankle injuries are one of the most common orthopedic causes of an emergency room visit.

Sometimes after an injury, your body awareness system stops working properly, and you may need to do some specific balance exercises to re-teach your body what it needs to do.

In this blog post, we show you some simple and effective exercises you can do with Indian clubs in the context of rehab, and even prehab. Just make sure to have the go-ahead with your physician before you start!

The goals of ankle rehab usually are:

Proprioception is your body’s ability to realize where it is in space. This body awareness is an important component of human movement, as it helps us to move fluidly and easily without having to consciously think about the forces (like gravity) that are acting upon us.

The great thing about Indian clubs is that most of the benefits are reactive or happen on a reflexive level, meaning that you do not have to think about them. The clubs try to pull you off balance, and you automatically correct your posture to avoid loosing it.

The first exercise helps regain ankle range of motion, the second one helps with balance and proprioception.

After you have tried those 2 exercises, you can move on to more challenging balance board exercises as shown below.

No need for fancy equipment to make a simple balance board, be creative as we demonstrate in the video. Use zig zags and elevate the boards slightly instead of leaving them flat. Don’t go crazy though, make it interesting but safe!

If you want state of the art balance board, we have the Strobel and Walter yogaboard in stock. You can get the effect of training on water or snow right in your home fitness training space.

If it sounds like too much of a hassle, or you don’t have room, simply go outdoors and walk on uneven terrain (like sand and hills), barefooted if possible. This will build up strength and mobility too.

A 2015 study by Škarabot et al compared the effects of self myofascial release (SMR: a fancy term for auto massage) versus static stretching alone.
The results showed that range of motion at that ankle increased by 9.1% when SMR was performed along with a static stretching routine.
Athletes performing static strecthing alone only reported a 6.2% improvement.

Just about everybody reports tight calves. One of the reasons is that our ankles and feet are rarely challenged through their entire range of motion in our day to day lives. We walk on perfectly flat (and hard) surfaces, and spend way too much time in shoes constricting our feet.

We show you a way to use your Pahlavandle™ as a self massage tool, how to stretch your calves, and ways you can assess your improvement in range of motion.

Better ankle mobility might also help you sit deeper in a squat, so get rolling and swinging!

Shena push ups are always performed in the Zoorkhaneh before club swinging.

The Shena represents a sword. Legend has it that the warriors did their push ups off their swords to avoid their hands sinking in the soft desert sand. Since the Zoorkhaneh is highly ritualistic and traditionalist, to this day, push ups are performed on a shena, a wooden push up board.

Ron takes you into the Heroic Sport workshop, and builds one in front of the camera in about 8 minutes!

Even if you’re not a handyman, you should be able to build this simple tool.

BUT PUSH UPS ARE HARD FOR MY WRISTS…

If you usually have sore wrists when doing push ups, the shena might be a good thing for you to experiment with, as it removes some of the stress on the wrists. With the fingers wrapped up around the board instead of stretched out. most people manage fine!

Shena push ups are performed at a slow and steady tempo, allowing for a dynamic stretch in the top position.Slow tempo, also means they are done for high reps.

In our Meels 101 video course, we have set a benchmark test for push ups and 4 count swings. Check it out!

You’ll need a wooden board of about 120cm, roughly 6cm wide and 2cm thick, or as close as you can find in your hardwarde store.
With your elbows by your sides, lift your hands up, creating a W. Your hands will be just outisde your shoulders. That is the length of your board for YOU!

The tools you need are:
• a handsaw
• a screwdriver (OK, Ron’s cheating, he’s using a cordless)
• 8* 70mm screws with a tapered head
• a bit of sandpaper

If your push up board slides around, use some chair leg pads. Voila!