I am going to share with you my advice for low back pain, and what I have learned from personal experience over the last 20 years or so. I managed to build a strong and back after years of being in pain, and so can you.

In the middle of year 2000 I was biking home from a mountain bike ride, and had an accident that affected my back and hips for about 7 years.

On a downhill section, about 500 meters from home I saw a dog on the footpath. I had been chased by dogs before, so I was alert.
Just as I was getting level with it, it crossed the road and was coming for me. Now, I had full MTB armour so instead of slowing down, I pedaled harder hoping to outpace the dog.
However, my front wheel hit the dog right in the middle of its body. I instantly went from 35km/ hour or so to a dead stop, and flew in the air. So far so good. The landing was another thing.
In retrospect, hadn’t had armour and helmet on, I would have probably dismounted and walked slowly, and avoided about 7 years of neck and low back pain…

I will tell you what helped me out break and end the pain cycle back then shortly.

Ending the year with a bang

Fast forward to New year’s eve’s day 2021.
I had a great workout, and out of the blue decided to try a calisthenics exercise I recently saw on social media. Can you already hear where this is headed?

I just saw the exercise, not the portion about how to get into position.
After a bit of thinking, I figured out I could probably get into the inverted position on my stall bars by walking my legs up. Never mind that I recently turned 51, I felt fit and strong!
I have since found out there is a safe way to get into position that I could have checked out before hand. There is a lesson to be learned in this. Even for me.

Anyway, my back said a very loud series of pops just about as I was getting into the starting position. The pain level was up there with that of my bike accident.

I ended up spending 3 days flat on my back. Standing or sitting for more than 2 minutes at a time was painful as hell. I could come to the ground by doing a squat on my toes and then using my arms, but no bending forward or hinging my hips whatsoever.

In the past, walking around and hanging from a bar helped me decompress the spine, not this time. I thought there and then that I could as well write the whole of January off.

When everything is out of whack, pain and dysfunction ensues. 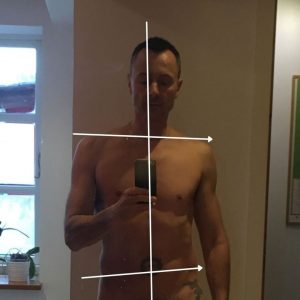 This picture was taken on day 3. You can see how my right hip is elevated compared to my left hip.

On the morning of day 4, I had enough of laying in bed and reading.

I starting doing some light movements on the floor. It was uncomfortable but bearable.

I experimented with various crawling, rocking, and back exercises on the floor such as alternating superman and back raises. The first few reps felt impossible, like my muscles were shut off. But it paid off,

I managed to go for a 20 minute walk that day, and spent most of the day standing up, taking breaks to ease the pain and discomfort now and then. A wrong move and it felt like someone stuck dozens of daggers in my hips and lower back.

But moving around definitely helped.

I decided to load some movements and activate my muscles further as soon as I felt I could. Hardly what you’d call strength training, but that’s what is was.

Later that day, I started doing some light hip hinge movements, within the range of motion I could do pain free. I typically did 10-20 reps, and by the last reps, my pain free range of movement was greatly improved.

Here are what I found most effective: pushing down against a resistance band as if doing a deadlift, jefferson curls, seated good mornings, side bends, glute bridges, hamstring curls, split squats. hanging knee raises and some Indian club work. All these exercises can be done at home with minimal equipment.
I am aware that Jefferson curls and side bends are a no-no according to some trainers, but they helped me. 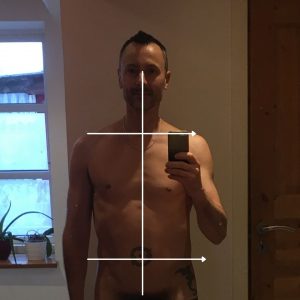 By day 5, my back and hips are straightening. I have had a very slight scoliosis from childhood, but so I am almost as aligned as I can be.

Although far from being fully pain free, I can say that I am more functional than what I expected in such a short period of time.

I even learned that vacuuming the house was therapy for my low back pain!

So my advice to you if you have a bout of back pain, is to take a couple days off to let the acute pain recede.
Then go straight to strengthening exercises. You just have to be sensible about the range of motion and weight you use.

What helped me after my bike accident

Strength training is what helped me out of my 7 year bout of low back pain after my bike fall. It’s what is helping this time too.

I started with kettlebell training in the Summer of 2007, and went on to win a gold medal at the IGSF World Championships in Kettlebell Sport in 2010 at 40 years old.
I even had a veteran record in Denmark for squat and deadlift in national powerlifting competition from 2012 until 2015.

So there is hope for recovery!

Amazingly, with all the money I spent on different therapists those first 7 years, you’d think someone, at some stage, would have mentioned something about deadlifts to me. As soon as I started training hamstrings and glutes, many problems went away.

Life  has taught me that pain is not permanent.
And that being strong and healthy isn’t either. Life happens, and unfolds in surprising ways.

There will be most likely down periods. Like me, you might do some stupid things…Yes, it is annoying, goals might be delayed.
But when you have been through the process once, you can do it again.

Will it work for you?

Every case of back pain is individual and may need an individual approach.
But in any case, I can say that prioritizing strengthening has shown to be superior to just stretching the muscle groups that were tight.

Don’t get me wrong, I am not against stretching, be it dynamic or passive, I stretch too. Just not when I am in pain.