Let us introduce you to our Pahlavandle Indian clubs collection and a bit of the story behind it!  Back in 2017 we launched the original Pahlavandle™ to make it easy and accessible to everyone to get started with Indian clubs. Since then we have released another 3 Pahlavandle models to complete our range so far.

Ron got the idea for our set of adjustable Indian club handles in 2015, while flying back to Denmark after a holiday in Canada.
As you may know, Indian clubs were the key to his recovery after his accident. He basically took his clubs with him everywhere so that he could practice daily.

Long story short, his mum asked him to leave the set of clubs he had with him, as she
wanted to keep practicing too. 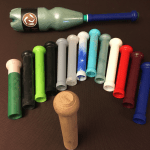 Now, Ron has some official inventions to his name, and his creative mind got to work while sitting on the plane. How to make a set of Indian clubs that you could take anywhere with you, and be so affordable that everyone could benefit from the healing and restorative properties of those old exercises.

As soon as he got home, he created the first prototype out of wood. 2 years and 6 generations later, we were ready to launch!

Pahlavandle XL (no longer in stock)

Ron surprised me one day with his idea of how to make an adjustable heavy and big Indian club. The concept was so simple and elegant!

Like the original Pahlavandle, we wanted a club that could be swung single and double handed.

The handle diameter at its thickest point is 42 mm. Instead of a knob, we settled on an unconventional reverse taper which provides an unusual grip challenge.

In the beginning of 2020, I asked Ron to create a hybrid karlakattai club made of solid wood, with a 50 mm thick grip. Later that year, using the same construction as the XL, we launched the TG, an adjustable version of that club.

It’s personally one of my favorite! Short, tubby and compact and packs a punch. Awesome grip challenge, and perfect for the exercises we cover in the Ace of clubs.

The latest addition to our Pahlavandle Indian clubs collection is the Gama. A hybrid between a mace and a club. The plate loading system is fast and very precise.
And you can spread the plates to create a different weight distribution of the weight.

This prompted me to think of a special program, taking advantage of the possibilities of micro-loading the Gama. We might release it someday when we get time…

This program will focus specifically on incremental loading to develop full body strength with only a single heavy club, 4 key exercises, and 3 sessions a week.
4 exercises provide enough variety in movement patterns to avoid overuse injuries that can sometimes happen when following a minimalistic program approach.

This training template can keep you busy for over a year as you become progressively stronger!

We believe that being able to adjust the weight of  Indian clubs is both a money and space saver.
As you grow in skills and strength, it’s very easy to keep challenging yourself.
And the construction of the our clubs have a totally different feel in the hand and quality of the swing compared to metal clubs.

Let’s see what we come up with next!

You can view all our other clubs here.

We hope you enjoyed the article, remember to share with friends!