What do you picture when I mention heavy Indian club exercises?  Probably a scene from the Persian Zurkhaneh, or the Indian Akhara, where swinging 2 large meels or joris are performed?
While it is common within the steel club community to train with a single club, many wooden Indian club practitioners dismiss this a non-authentic or non traditional. In this article I give you 3 reasons why you should include single heavy club exercises in your training.

You can read comments on social medias saying that swinging with 2 hands on a club is wrong. Yet, those same people swing gadas and other type of maces with 2 hands… But I digress.

Doing heavy Indian club exercises with 1 hand or 2 hands on the club is even found in the English literature of the 19th century, when Indian clubs made their way to Europe. This style of club swinging is as legitimate and ancient as any!

In India, swinging a single club appears to be more common place the more one travels South. The design of the clubs also change from a conic shape reminiscent of the Persian meel to a straighter log shape. The handle on these clubs is typically 8-9 inches, providing room for double handed grips without having to fight for space.

In Tamil culture, there are 6 different types of Indian clubs known as Karlakattai, each with their specific functions.

Swinging a pair of heavy, bulky and long clubs severely limits the range of exercises you can do with them. While back circles are great, they can rapidly become tedious…
By contrast, swinging a single heavy club offers a myriad of possibilities, and also way more options of integrate footwork and lower body exercises. 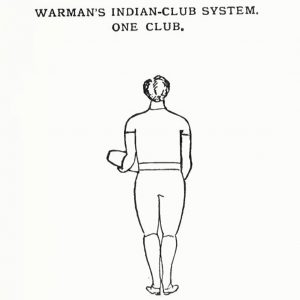 You should start by swinging a single Indian club because it is simpler to coordinate, and therefore faster to learn. By switching grips and avoiding fatigue, you can also maintain your heart rate elevated to get the benefits of cardiovascular fitness.

That’s the main reason why our level 1 online certification covers only single club swinging. It really is the foundation necessary to perform complex double club swings in the long run. 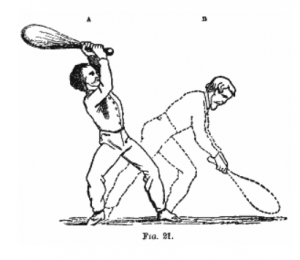 You can swing heavier clubs from the start. While the European systems of double club swinging often recommended 1,2kg clubs as the first weight for men, the typical starting weight for mugdars and karlakattais would be 3-5kg.

You can guess that the physical adaptations and physiques resulting form training with light clubs would be different from the heavy clubs.
As long as you slowly build up volume in a progressive way, there is no reason to think you’d be more likely to injure yourself with a single heavier club.

Proponents of heavy Indian club exercises such as Sam D.Kehoe and Professor Harrison, were rather opinionated on the matter, thinking light clubs a good form of exercises for children and geriatrics. At Heroic Sport, we however think there are many benefits to also swing light clubs!

As many of the single heavy Indian club exercises are based on fighting techniques, many of the swings also make use the diagonal and horizontal cutting lines, which are often times neglected by club swingers.

As we know, variability is essential to human development and health, and movement variability ensures you do not neglect movement patterns.

To that purpose, we have created a series of heavy single Indian club exercises, which progressively become more complex and challenging in each volume. It’s been planned for the beginner in mind, but anyone will be able to train at their own abilities and enjoy a great workout.

If you haven’t checked out our Hanuman workouts yet, you’re in a for a treat, as we designed a whole 4-6 week training cycle template, including one for instructors running classes or bootcamps. The whole work is cut out for you, just warm up and hit play! With 6 volumes, that’s at least 6 months of training! Buy the whole series, and get 40% off.

Or check out the Indian club challenge, and the Ace of clubs programs.