Home Blog Should you use the military stance for HEMA?

Is the military stance with Indian clubs useful for HEMA practitioners? Training with Indian clubs has a long history in the middle and far East. By contrast, in the West, Indian clubs are roughly 200 years old, when the Brits adopted the practice and brought it back to Europe. They changed a lot of things about Indian clubs, from the shape and weight, to patterns and exercises, to the way to stand with the clubs. In this post, we’re going to look at why the British focused on the military stance, and if it makes sense for you to use it or not, especially if you train for HEMA or any type of sword fighting. To help you decide, we’re also going to look at locomotion and the role of the core. 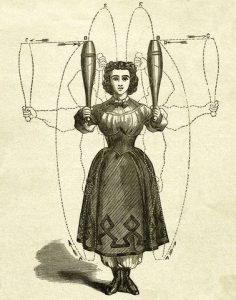 Look at the old books on Indian clubs from the 19th century and you will most likely notice the models standing with heels together and feet 45 degrees out. This is called the military stance, the agreed convention of the Victorian age. When swinging this way, the whole body must remain squared up, not allowing any rotation at the head, shoulders or hips. It looks fantastic when doing a choreographed routine with several people swinging clubs at the same time. But the military stance also decreases the base of support, therefore decreasing stability and the amount of weight one can swing. The native club swingers of Persia and India stood (and still do) in a wider stance to maintain stability, and transfer power from the ground up. There is no way you can swing heavy clubs with your feet together. The only time you’d want to narrow your base of support is if swinging by the side of the body or figure 8s, but does it make sense to have the heels touching? That’s up to you. Rotating the hips and shoulders as the club drops behind the back assists the swing and brings the club to the end of its full arc. If you lift weights, you know there is a difference in how much weight you can lift above your head depending on your stance (narrow or wide) and the degree of leg involvement (strict or push press). The same goes for club swinging. Sure, you might not be interested in swinging heavy clubs, but the concept of full body integration applies to all sports. I must also say that I spend most of my day to day training time swinging clubs under 3kg. I also swing clubs from 4-8kg a few times a week, and heavy clubs once or twice a week.

How does the military stance affect body involvement?

When swinging Indian clubs in the military stance, the whole body is squared up, and the clubs move around the body. To compensate this fact, the core must work against the natural body rotation that happens when swinging clubs. Remember that the British style of club swinging is done with light clubs. In contrast, the Persians and Hindus swing heavy clubs using their full body with every move. Their body weight shifts from leg to leg as their hips rotates naturally along with each swing. In a 4 count Meel swing for example, the feet and hips move in sync with the swing, creating a pelvic rhythm. When swinging this way, the clubs have the right of way, and the body moves around the clubs.

The reasons behind the military stance

As always, we have to look at context why the Brits decided on a more rigid approach to club swinging.

There are 2 reasons we can speculate upon.

The British military forces used Indian clubs as a way to train the troops, not just for health reasons, but also for discipline and  combat, when fighting on horseback with cavalry saber was still actual.

While swinging Indian clubs by itself won’t make you better at sword fighting, there is some transfer to it. This is why many HEMA practitioners are recently taking interest in Indian clubs.

In the saddle, the legs’ main purpose (while far from static) is to help the rider stay on horseback, not to assist the power of the saber cuts. So it might make sense to train in a rigid way, and develop strong arms, shoulders and grip.

If you train HEMA, you need to be able to move and use your whole body as one unit!
What looks great at the Royal Edinburgh Military Tattoo has to be remembered for what it is: an artistic display of club swinging.

The second factor is that during the Victorian and Edwardian era, it was simply rude to shake and swivel your hips in public. Since Indian clubs were taught in large groups in institutions, swung for public demonstrations, and also taught to upper class clientele, you just had to tone it down back in those days. After all, if you were British, you were expected to behave in a certain way…

How does this relate to locomotion and movement?

A braced core (think anti flexion, anti extention, anti rotation exercises) is useful while lifting heavy things to protect your back. Athletic power and locomotion is something different.

Think of punching, kicking and throwing. Your trunk generates power through rotation and side bending to turn movements into a true full body exercise.

Many people are under the impression that the legs are the main player in locomotion and human gait, while the trunk is passive. In this theory, the legs are supposed to rotate the pelvis for motion to occur. This has been proved as wrong, as the legs cannot do such a thing.
The current theory is called the spinal engine, where the trunk is actually the driver of movement. Side bending produces torque which rotates the hips and allows the  legs to move.

This is of course a simplification, we encourage you to read more about it in this article: LINKING THE SPINAL ENGINE.

When you realize this fact, you’ll understand why the natural stance makes more sense.
And why figure 8 moves are so important to include in your training regardless of your sport! You can’t do this properly in a rigid stance. Your knees will not be happy either… Drop the military stance, allow body rotation and weight shift, swing and move like a cat.

So when should you use the military stance?

We can think of 2 instances when you should swing Indian clubs in this way:

Remember to use light clubs, and use this in therapeutic doses!