Home Blog How to choose your first set of Indian clubs

So you’re willing to try Indian clubs but you are not sure what type and weight is best suited for you. This guide is for you!

Indian clubs, steel clubs, clubbells, Persian meel, Indian Jori and Tamil Karlakattai. All these Most of these clubs have a set length and weight. There are many types of clubs out there, and nobody likes to fork some money out to find out they bought something not relevant to their needs… Clubs can be too short, too long or too heavy. Read on and become wise about choosing what you need.

In the West, what we call “Indian clubs” are made of wood and typically weigh from 500g to 2kg. These clubs were inspired from the large Indian Joris, and designed for British style club swinging back in the mid 1800’s.

Because of their light weight, a wide variety of figures can be executed. These clubs are a fine way to start with club swinging!
The main purpose of these clubs is skill practice, coordination, mindfulness and mobility. Traditionally, ladies start with 500-750g, and men with 1kg.

A club creates a long lever arm which increases the forces generated with each swing. It always takes people back how such a light weight can be so difficult to handle…

Tommy Kono was a famous weightlifter in the 50s and 60s with multiple world records. His advice was to use light Indian clubs and concentrate on perfectly smooth swings.

Unless you are really well trained and with a good body awareness, you won’t really need to go much heavier. Remember you are not lifting the clubs like a dumbbell!

Indian clubs can be bottle shaped or tear drop shaped.

For example, the Perrier bottle was designed after Indian clubs. Tear drop clubs look like mini war maces, with all the weight towards the end of the shaft. This design spins aggressively and fast due to the weight distribution. Bottle shaped clubs tend to be more forgiving.

Next is the length of the clubs. For the classical exercises, it is important that the clubs are neither too short or too long.

Short clubs have a poor weight distribution which makes then clumsy to handle. It is really hard for a beginner to feel the swing, and as a result, they end up moving the clubs around the body without any flow.
If the clubs are too long, they might end up hitting each other and get in the way in some of the exercises.

When swinging with 2 Indian clubs, the best length is roughly from your armpit to wrist. For most people, that is a club from 45-55cm length.

The accepted history, is that clubs (“Meel”) were used as training form for warriors and wrestlers  in Persia, and that at some period they crossed over into India (“Jori” or “Mugdar”) and Pakistan (“Mungli”). These clubs are similar in shape, yet they have their own local flavor.

As the Brits were stationed in Indian and not Iran, they gave the name to the clubs. However, the Joris were large and heavy, from 4kg to more than 20kg per club. Typically, large clubs are only swung behind the shoulders in alternate fashion. The competition meel are around 1 meter in length, and Joris can be over 1m20! We are talking about very specific clubs with limited use for most people.

Why did the Brits change the design?

One of the reason the Brits went away from the original club design is that they weren’t handy to transport and mass produce for the army and other institutions.

If you’re going to swing Persian meel, ladies can start with 2kg per club and men with 3kg. Your first goal before adding weight should be to perform 100 unbroken reps of alternating back circles (also called shield casts).

In Southern India, 5 designs of clubs known as  “karlakattai” have been used to train soldiers, bowmen and even farmers. In contrast to the meel and jori which are always swung in pairs, the karlakattai  is also swung as a single club, sometimes even with 2 hands on the club. Traditionally, there are 64 types of swings, including footwork, making this system of heavy club training a favorite of ours.
Our Pahlavandle XL is the answer to the Karlakattai. You can adjust both length and weight.

Start light and build up progressively to a heavier club.

Clubbells, or the original clubs made of steel, made their apparition in the the early 2000s. Copies followed soon after, some good, many bad. The problem some  steel club is poor weight distribution and swing mechanics, and a knob that can be so big, it gets in the way of your wrist.

Clubbells are mostly swung with 2 hands on the shaft, and the emphasis is on heavy club swinging, using the whole body.

Steel clubs can be intimidating for beginners, as one can expect to knock knees or heads in the learning stages.
With weight ranging from 2kg to 20kg, expect a lot of variation in how well they swing due to the different sizes and weight distribution.

Why the Pahlavandle™ is best! 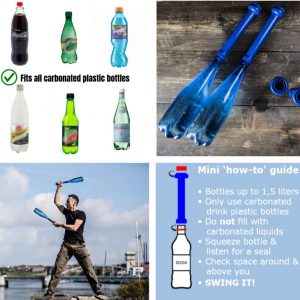 With one set of handles and a few plastic bottles, you get a whole range of clubs up to 3kg. The Pahlavandle allows you to adjust the weight accordingly to the exercises you are doing, and figure what is right for you!
Length and weight is easy to adjust by simply changing bottle size and filler.

Due to the shape and design, the Pahlavandle™ swings as beautifully as a perfectly balanced wooden club!

Being soft, you won’t injure yourself should you hit yourself. This is why we have kids and older people taking up Indian clubs training!

You can also extend the handle to create a short mace or a substitute for Persian meel.

And since you can take them in your carry on, and find soda/ sparkling water bottles around the world, you won’t have to stop swinging during your next escapade!

Sources: Picture source is documented on each picture